Take me to Betfred
I don't care, I want to sign up to Coral

Take me to Betfred
I don't care, I want to sign up
to William Hill

This offer is available to new players buying the Welcome Games Bundle. No strings attached on any winnings.
New customers can try our best games and enjoy 50% off. You'll get 100 spins across 3 of our most popular games!
This offer is limited to one per new customer.
Free Spins you purchase will be available for play under Games.
The number of spins you purchase are locked at the stated level until completed.
See full Lottomart terms & conditions.

Note: This review is based solely on the opinions of ComparetheLotto.com. Please be aware that odds, offers and features are constantly subject to change. Always check the operators sites for factual verification. #Ad. Find out more on our How Our Site Works page.

The concept behind the Postcode Lottery is a simple one - you sign up with your postcode, there are daily draws, if your postcode is drawn you win some money. What’s more opaque and slightly confusing is what your chance of winning is and what size your jackpot is likely to be.

CompareTheLotto.com has done an in-depth review to simplify the Postcode Lottery for you. Let’s get started:

When Is It Drawn?

How Much Can I Win?

Per £10 monthly subscription you have the following chances of winning:

How Many People Play The Postcode Lottery?

Based on a 1 month subscription of £10 - the minimum required to play. The odds of winning the postcode lottery are:

Compare Against Other Lottos

Want to understand how we calculate 'Value'? Read More

Based on the calculation above we got the following figures:

You have to remember you share the prize by the number of your neighbours in the same postcode signed up to Postcode Lottery. We can do some basic maths to get an approximate probability:

The £3,000,000 jackpot is divided by the number of neighbours in your postcode. This can vary widely, so let’s look at a few scenarios

We don’t know exact figures, however, the winners section on the Postcode Lottery website seems to suggest the average jackpot win is in the region of £100,000 - £200,000

The Postcode Lottery doesn’t offer an option for playing in a syndicate. Although it would be possible, it could perhaps be confusing to create a syndicate with multiple players from mutiple postcodes.

Since it’s inception in 2005 the Postcode Lottery has donated over £500M (as of December 2019) to charities such as WWF, Dogs Trust, Woodland Trust and WaterAid.

Due to their high profile good cause donations the Postcode Lottery has got some rather special celebrity endorsements: 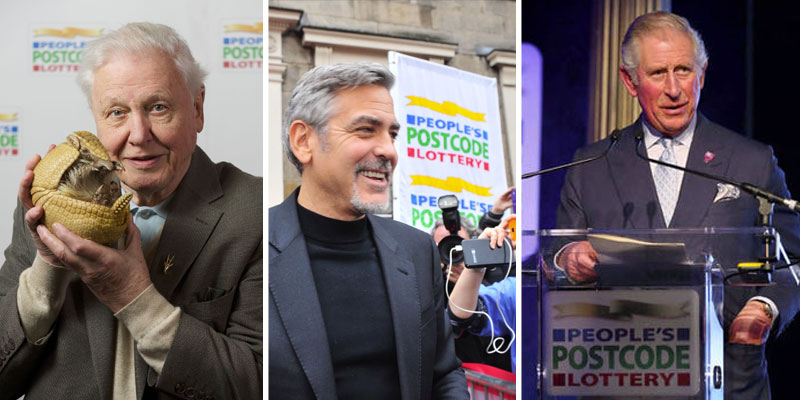 Commission on Winnings: No

License: Postcode Lottery Limited is incorporated in England and Wales and is licensed and regulated by the Gambling Commission UK. Company reg. no. 04862732. VAT reg. no 848 3165 07.

* Information correct as of 17/12/19. Check www.postcodelottery.co.uk website for latest information

Postcode Lottery is ranked #3 out of 3 traditional lotteries

The Postcode Lottery doesn’t seem to offer any promo codes or regular offers. In our opinion this is a mistake. Lotteries such as the Health Lottery offering weekly promotions really makes things interesting.

Compare Against Other Lottos

Want to understand how we calculate 'Value'? Read More

Based on the calculation above we got the following figures:

You could win with at the same time as your neighbours - makes for more of a community feeling lottery.
Good odds of winning a small prize
Fantastic work for good causes across the UK. 32% of ticket sales goes to good causes.

Having to pay £10 per month to be entered into all draws is quite inflexible. It would be better if you can enter a single draw or multiple as you wish
No live draws
No scratchcards or instant wins plus the monthly subscription model gives it quite a boring feel - set your Direct Debit and forget about it. It lacks the excitement of traditional lotteries.

Around my area ex15 and surrounding areas I have found that the most people win is £10. Looking back over 5 years that some people have been signed up for are well and truly losers. Paid in, £600, won at most over those years is, £100 to £120. I am now going to research other areas of the Uk to see which areas are winning big. Needles to say I am stopping paying into the P C L.
By Duped

The only people that I can see that win this already have nice houses in a nice area, so why is it guys like us are only winning the odd £10 mmm feels like it's for the guys who have something and not us guys who have naff all.
By Neil

Lucky if you live in Birmingham and surrounding areas

When I first signed up around 4 years ago ,I was winning £10 on a regular basis, that soon came to end and haven't won anything for over a year, but my neighbour has £10 twice in the past 2 months, not me, how does that happen. Going to cancel mine.
By pip

Not good, NORTH WALES IS LEFT OUT. Mentioned it to them, a week later won a tenner !!!!??? Make of that what you will !!??
By Lynda Gripton

No one in our area

Was on this for nearly a year. Few £10 winners but no one in our postcodes won the £30k. Its more midlands and up North it seems. Needs to be more centralised.
By Cliff

Not the right area

Apparently, where I live is not a popular area.. Too far north... Pah
By Briggs

What about central areas of London

This lottery has hit certain country locations twice, either a mews or colder sack what about tower blocks London streets. It seems these have too many occupants so payouts could be expensive.
By Chezza

They sponsor Emmerdale and are all over the TV at the momoment. They've obviously got loads of money so why is the jackpot so sh**?!
By Danny J

This offer gives you 3 Free Irish Lotto bets when you place a bet on Irish Lotto. Players need to enter this promo code when claiming the offer: COMPARELOTTOIL. This offer is available to claim until 23:59 CET on 31.12. 2020. Can be claimed only once. Players must be aged 18 or over. BeGambleAware.org. This offer is subject to Jackpot.com Terms and Conditions.

Comparethelotto.com was started in May 2012 with the aim of finding lottery betting customers the best possible deals.
Read More »

A Happy New Year From All Of Us At CompareTheLotto! Posted 11 Jan 2020

ComparetheLotto.com Looks Forward to an Exciting 2021 in Lotto Betting and More Posted 19 Jan 2021